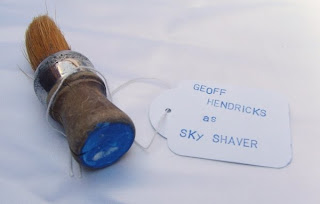 
Amador Sola used this shaver brush every day during the three years he was interned in a Franco’s labour camp after Spanish civil war (1936-1939). He wanted to be nice and clean because he always had in mind that “that“ day could be the one of his liberation. That shaver brush was a means for freedom. Years ago Geoff Hendricks he also did an act of liberation by shaving all the hair on his body. This Sky Shaver Brush its a symbol of their connection to me.
Posted by Cecil Touchon at 6:34 AM